Our patented airgun regulators that we have to offer over the competition are characterized primarily by placing minimal demands on the skills and equipment for a buyer as far as installation and their main feature are that the installation is never needed anything permanently remake on the rifle. You can give the gun to its original state without the regulator any time you want. No need to drill holes anywhere or anything like that of competing regulator. It is also not necessary to have special equipment. In most cases, this will suffice the basic tools in the form of Allen wrenches, pliers and a vice case.

For maximum simplicity and clarity, we have created a series of videos with labels according to which you can go step-by-step to install regulator, even if you are not a technical type. In case of any doubt, it is always possible to send an email with your question, where we try to answer the most quickly.

Our regulators are also characterized by excellent precision output pressure that often working at the limit 1-3bar which has a very positive impact on the resulting consistency of speed, which can move in the range of + – 1 – 1.5 m / s 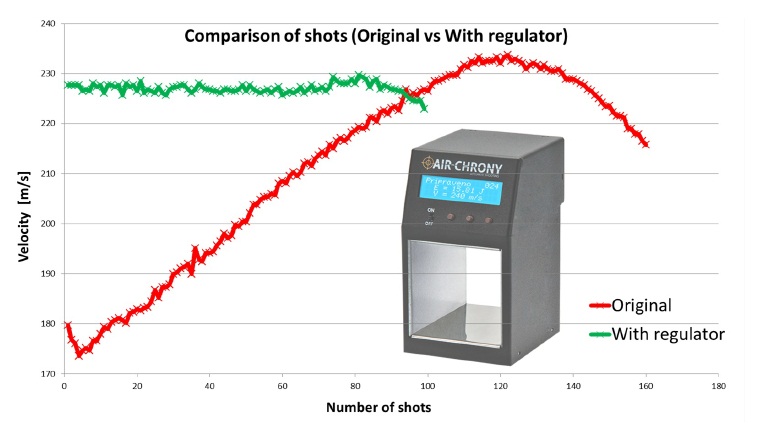 Function and benefits of the airgun regulators

The regulator is a device that is created to regulate (maintain) the output quantity to the desired value, or within the required limits. In our case, this variable is pressure which has entered into the barrel during firing. Normally, the air pressure is unregulated, because it depends on the actual pressure in the airtube, and this pressure decreases with the number of fired shots. This change in pressure has a negative effect on the periodicity overflow system, which doses the amount of air in the barrel and determines the speed and energy of shots. The reason for this is that high pressure leads to increased strength to the valve and firing mechanism is opened for a shorter period than when the valve is pressed against the lower pressure (Power is proportional to the pressure, so when is 200bar, contact force is twice as high as 100bar on the valve) and leak less amount of air which ensures slower velocity, which in the end causes the bullet hits the target at a lower height than the point of aim. Conversely may even at higher speed bullet hit the target higher than intended.

Pressure regulator which guarantees constant output pressure, until the pressure in the airtube is higher or equal to the set output pressure. If we set the output pressure of the regulator 100bar, so the pressure is maintained at all times while it is in the airtube pressure higher than 100 bar. This eliminating the problem of different strength on the valve and the system always operates with the same pressure, therefore bypasses the same amount of air and this leads to the same output speed between firing rounds, and therefore, therefore, no deflections height hits. This change causes, it is possible for one airtube filling, fire more shots than without the regulator.

Summary it can be said that the regulator provides more accurate shooting (better consistency of shots) and a number of shots on one filling airtube. If I use the terminology of the human body, the barrel is the heart of airgun and the regulator is the brain.

Brands of pcp airguns for which we delivered our regulators: 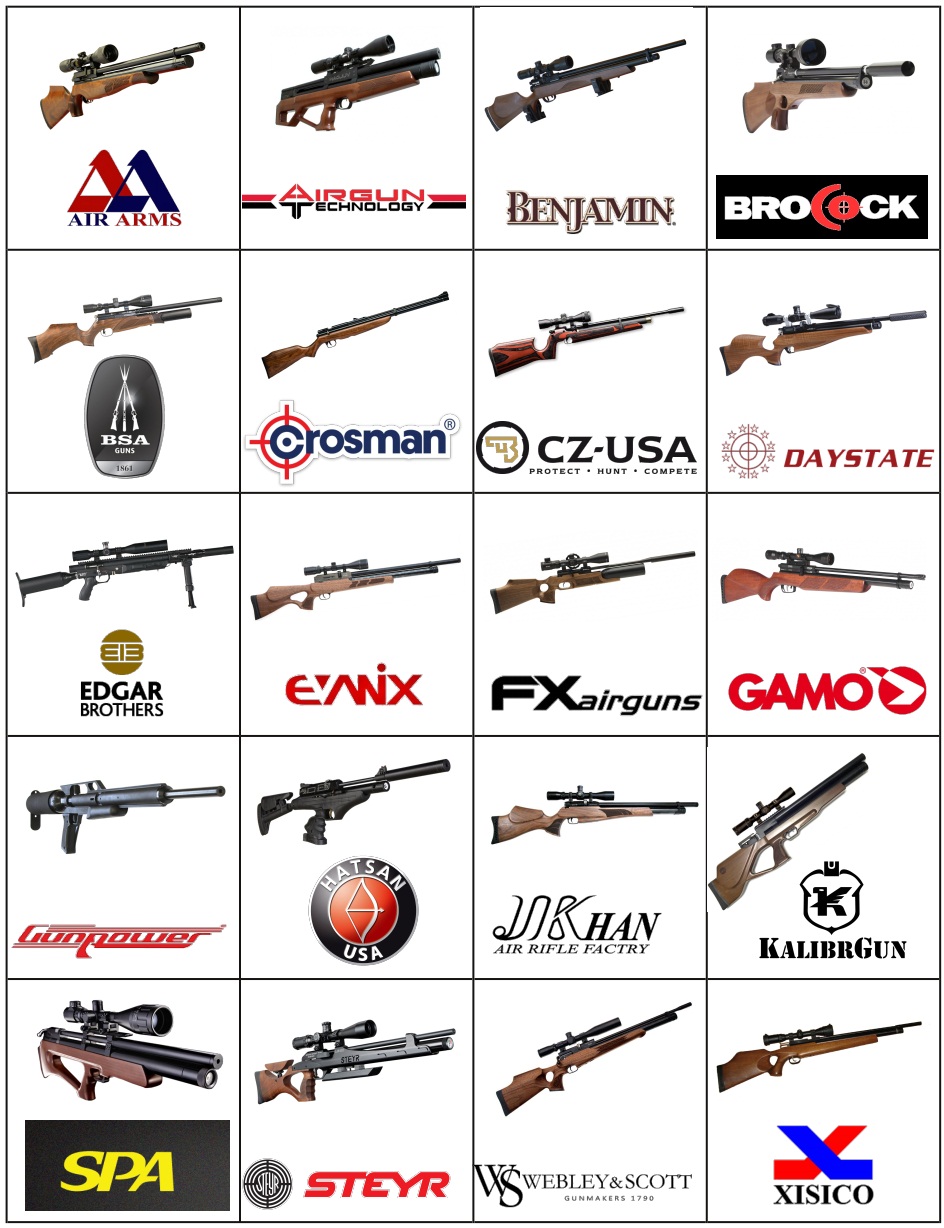 Another important attribute of the regulator is the speed with which they can return after a gunshot regulated pressure in the chamber to the desired value. This attribute determines how quickly you can fire again after the previous shot without there was a change in consistency. Changing consistency may arise that the frequency of shots is greater than than the speed with which regulator is able to fill the air in the chamber to the desired pressure. If it is fired before the pressure reaches the desired value, velocity is lower, the pressure in the regulated section has not yet reached the desired value.

Altaros regulator output pressure can be set from 100bar (1450 PSI) to 150bar (2200 PSI) and after consultation of up to 170bar (2500PSI) which corresponds to the rotation of the screw behind value 150bar so that the line of the screw is pointing to the letter R. For a quick setting is on regulator engraved scale according to which the desired output pressure can be set. The total scale range of 100-150bar corresponds to approximately 2/3 turn Unscrewing, or screwing setting screw more than 1 turn may result in a malfunction of the regulation and scale will not show you regulated pressure. Groove on red marked half of setting plastic screw represents pointer which shows you currently set pressure on scale. To change the pressure on the regulator, just simply rotate the setting screw with the flat screwdriver in the appropriate direction according to the regulator scale.


The new scale on the regulator 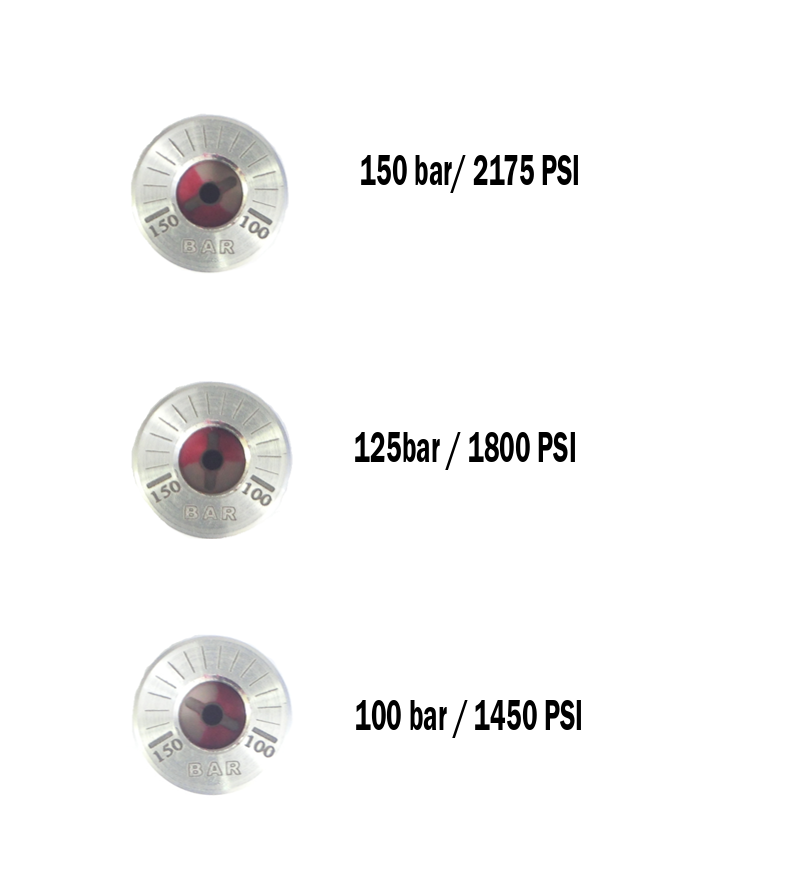 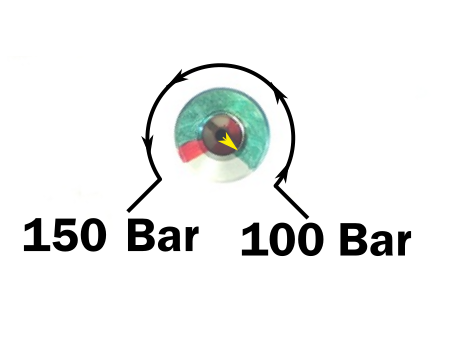 On this picture are shown old scale with 3 different settings